Humans can breed plants and animals to have useful traits. By selecting which animals are allowed to reproduce, humans can influence an organism’s genotype. What name did Darwin give to this kind of change in organisms?

Question 1 Explanation:
Darwin used the term artificial selection to distinguish this process from natural selection. Natural selection is the process by which living things with beneficial traits produce the greatest number of offspring. Natural selection results in changes in the traits of living things over time, as those organisms most fit for reproduction are more likely to pass on their genes than less fit organisms. Artificial selection, on the other hand, is the reproduction of organisms with beneficial traits resulting from the influence of humans. ‘Survival of the fittest’ is an expression describing natural selection, and hybridism describes an organism of mixed origin, not necessarily something bred to exhibit useful traits. Which of the following is true about the frog?

Next, assess the answer choices.

The frog is not a part of the salamandridae family, as it is not inside of the rectangle.

The frog is inside of the vertebrate circle, so it is not a non-vertebrate.

It is not possible to conclude that it is closer to most tetrapods than most newts given the presentation of the information.

The frog is a type of amphibian due to its spot within the amphibian triangle.

Which statement can be inferred about amphibians?

Question 3 Explanation:
Use the diagram presented to assess each answer choice.

All amphibians are vertebrates, not just some, so this answer is false.

All amphibians are tetrapods, so this answer is false.

What is the median time, in seconds, of the 6 bicycle racers?

Question 4 Explanation:
The "median" is the "middle" value in a list of numbers. To find the median, arrange the data set in ascending or descending order and find the data point located in the middle. If there is an even number of data points, take the average of the two middle values to find the median. Begin by arranging the data: What process is illustrated in the diagram above?

Question 5 Explanation:
The processes of meiosis and mitosis both involve cellular reproduction. The major difference between the two is that mitosis produces daughter cells that are identical to the parent cells. Meiosis results in cells that are not identical to the parent cells. In the diagram, it can be seen that the cells produced do not match the cell at the start. The diagram shows the process of meiosis.
In July 1957, members of a field party from the University of Kansas Natural History Museum, under the direction of Sydney Anderson, spent 12 days collecting vertebrates in the vicinity of Creel in southwestern Chihuahua. Among the specimens were two snakes representing an undescribed species of the genus Geophis. The discovery of a new Geophis species in southern Chihuahua increased the number of species in the genus known to occur in Mexico to 21 and extended the range of the genus by over 500 miles. Geophis aquilonaris is different from all other Mexican representatives of the genus because it has numerous, alternating pale and dark bands on the body and tail. Both sets of bands are in the form of complete rings, or the dark bands are joined ventrally rendering the belly dark.

Which sentence from the paragraph supports the idea that species in the same genus can have unique characteristics?

Question 6 Explanation:
The passage ends with the comparison of the newly discovered species of the genus Geophis. The word ‘different’ indicates that this species is unique from other species in the same genus, and the sentence continues to describe why: the snake has unique band markings on its body and tail. None of the other sentences discuss the specifics of why this particular species can be unique to other species in the same genus.
There are two types of planets in the solar system: Terrestrial and Jovian. Terrestrial planets are also called inner planets or rocky planets. They are smaller in size, higher in density, made mostly of rock and metal, closest to the sun, and have few moons and no rings. Jovian planets are also known as the outer gas giants. They are larger in size, lower in density, made mostly of gasses, further from the sun, and often have ring systems and many moons. There is also a sub classification of outer gas giants known as ice giants. Ice giants are smaller in size, smaller in mass, have lower amounts of gasses, and more rock and ice. Neptune and Uranus are ice giants.

What can be inferred from this passage about the differences between Neptune and Saturn?

Question 7 Explanation:
Recall that Saturn, the sixth planet from the sun, possesses rings. From the description provided, it is clear that Saturn would be considered a Jovian planet. The passage also states that Neptune is an ice giant, a subtype of a Jovian planet. The passage suggests that ice giants have all the characteristics of Jovian planets except that they are smaller in size, smaller in mass, have less gas, more rocks, and more ice. It can then be inferred that Neptune is smaller than Saturn, rockier than Saturn and icier than Saturn. 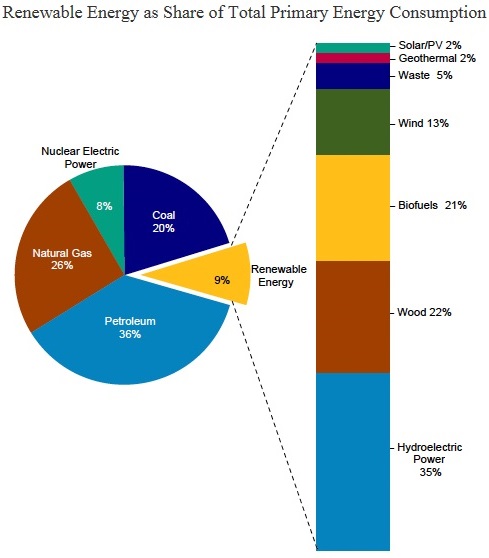 What percentage of total energy consumption is produced by biofuels?

Question 8 Explanation:
The pie graph indicates that 9% of all energy comes from renewable sources. This 9% is then divided into individual categories. Biofuels represent 21% of all renewable energy. The figure shows that 21% of the 9% of the total represents the consumption produced by biofuels. To calculate the percentage of total energy consumption represented by biofuels, find 21% of 9% by multiplying them together:

Information about the composition of ocean water is listed in the table below. 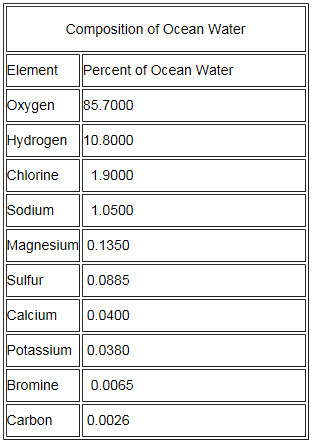 Which statement is supported by the data in this table?

Question 9 Explanation:
Use the presented information to evaluate each answer choice.

A direct comparison between potassium and magnesium (0.038% vs. 0.135%) shows that there is more magnesium in the ocean than potassium.

The use of bromine as a disinfectant is not related to the data presented.

Likewise, the importance of Carbon’s role in the ocean is not related to the data presented.

The birds in the picture below are able to pick out food from the fur of the deer. The deer will not attack the birds. In fact, the deer knowingly lets the birds rest on it. What is the name describing the relationship between the birds and the deer?

Question 10 Explanation:
Symbiosis describes a close relationship between organisms of different species in which at least one of the organisms benefits. The other organism may also benefit, or it may be unaffected or harmed by the relationship.
Once you are finished, click the button below. Any items you have not completed will be marked incorrect. Get Results
There are 10 questions to complete.
Return
Shaded items are complete.
Return
You have completed
questions
question
Your score is
Correct
Wrong
Partial-Credit
You have not finished your quiz. If you leave this page, your progress will be lost.
Correct Answer
You Selected
Not Attempted
Final Score on Quiz
Attempted Questions Correct
Attempted Questions Wrong
Questions Not Attempted
Total Questions on Quiz
Question Details
Results
Date
Score
Hint
Time allowed
minutes
seconds
Time used
Answer Choice(s) Selected
Question Text
All done
Need More Practice!
Keep Trying!
Not Bad!
Good Work!
Perfect!