This is the third in our series of free GED Social Studies practice tests. This test has 10 more free practice questions along with detailed explanations. While these questions require a basic knowledge of social studies, you must also know how to interpret charts and analyze texts. Whenever charts, graphs, diagrams, or text excerpts are included, be sure to study them carefully before answering the question!

Congratulations - you have completed . You scored %%SCORE%% out of %%TOTAL%%. Your performance has been rated as %%RATING%%

Your answers are highlighted below.

Which branch of the federal government can veto legislation?

Question 1 Explanation:
The President, as head of the executive branch, can veto a law passed by Congress. This is a crucial check to the lawmaking power of the legislative branch. However, Congress can override a presidential veto with a 2/3 majority vote by both the House and Senate.

Review the statement below:

This statement is best classified as:

Question 2 Explanation:
The statement is a factual piece of information that can be verified using official records and documentation.

This excerpt is from a George Washington's Farewell Address:

The great rule of conduct for us in regard to foreign nations is in extending our commercial relations, to have with them as little political connection as possible. So far as we have already formed engagements, let them be fulfilled with perfect good faith. Here let us stop. Europe has a set of primary interests which to us have none; or a very remote relation... It is our true policy to steer clear of permanent alliances with any portion of the foreign world; so far, I mean, as we are now at liberty to do it; for let me not be understood as capable of patronizing infidelity to existing engagements. I hold the maxim no less applicable to public than to private affairs, that honesty is always the best policy. I repeat it, therefore, let those engagements be observed in their genuine sense. But, in my opinion, it is unnecessary and would be unwise to extend them. Taking care always to keep ourselves by suitable establishments on a respectable defensive posture, we may safely trust to temporary alliances for extraordinary emergencies.

Based on this excerpt, what was Washington's opinion of foreign alliances?

Question 3 Explanation:
The sentence that best answers this question is: "It is our true policy to steer clear of permanent alliances with any portion of the foreign world." He also states that emergency situations call for temporary alliances, not permanent alliances. And he states that existing agreements should be honored, but not extended.

This chart provides a summary of President Lyndon B. Johnson's domestic programs: 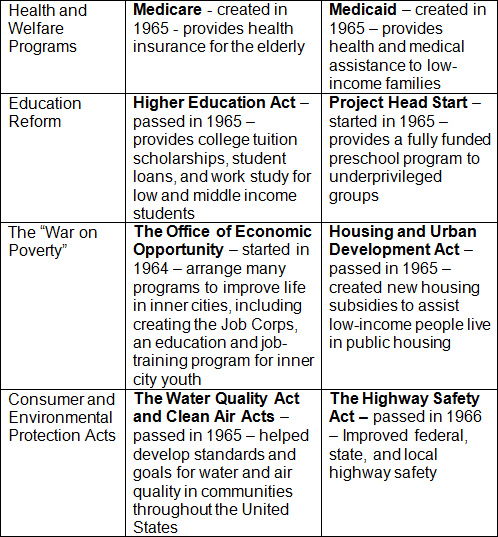 Which of the following programs was designed to help people of all income levels?

Question 4 Explanation:
According to the chart, Medicare "provides health insurance for the elderly." There is no mention of income levels; for all of the other choices, the chart specifies low or middle income.

The excerpt below is from the U.S. Constitution.

Article. V. The Congress, whenever two thirds of both Houses shall deem it necessary, shall propose Amendments to this Constitution, or, on the Application of the Legislatures of two thirds of the several States, shall call a Convention for proposing Amendments, which, in either Case, shall be valid to all Intents and Purposes, as Part of this Constitution, when ratified by the Legislatures of three fourths of the several States, or by Conventions in three fourths thereof, as the one or the other Mode of Ratification may be proposed by the Congress; Provided that no Amendment which may be made prior to the Year One thousand eight hundred and eight shall in any Manner affect the first and fourth Clauses in the Ninth Section of the first Article; and that no State, without its Consent, shall be deprived of its equal Suffrage in the Senate.

According to the excerpt, a proposal for amending the Constitution is considered valid when it is:

Question 5 Explanation:
The excerpt states, "The Congress, whenever two thirds of both Houses shall deem it necessary, shall propose Amendments to this Constitution…" 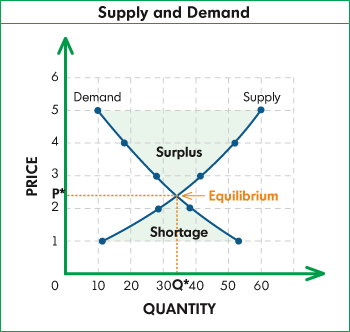 Which of the following statements is NOT true about this graph?

Question 6 Explanation:
The quantity supplied will NOT increase with lower prices. The supply curve on the graph shows that as price decreases, the quantity supplied also decreases. Higher prices will lead producers to supply higher quantities. It can be seen that the equilibrium point corresponds to a Q* less than 40 and a P* less than 3. The demand curve shows that as price decreases, the quantity demanded increases. At a quantity of 20, there is a surplus at any price greater than approximately 3.9.

Which of the following best describes the philosophy of the Libertarian political party?

Question 7 Explanation:
Libertarianism is a political philosophy that emphasizes individual liberty. Libertarians want to minimize the power of the state in both economic and social matters. Fiscal conservatism is marked by a reduction in public spending, government debt, and taxes. Social liberalism is marked by an openness to individual liberties so long as those liberties do not infringe upon the liberties of others.

Review the graph below: 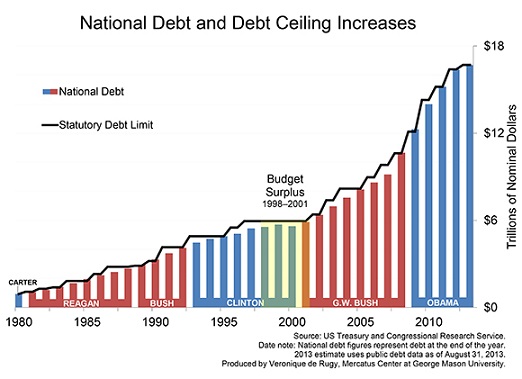 Which of these conclusions is supported by this graph?

Question 8 Explanation:
The graph shows that debt has increased during the terms of the last 5 presidents. Even under Clinton, where there were some budget surpluses, the total debt at the end of his term is higher than it was at the beginning of his term. The other statements may or may not be true, but there is no evidence in the graph to support them.

This excerpt is from the U.S. Supreme Court decision in Brown v. Board of Education (1954):

Segregation of white and colored children in public schools has a detrimental effect upon the colored children. The impact is greater when it has the sanction of the law, for the policy of separating the races is usually interpreted as denoting the inferiority of the Negro group. A sense of inferiority affects the motivation of a child to learn. Segregation with the sanction of law, therefore, has a tendency to [retard] the educational and mental development of Negro children and to deprive them of some of the benefits they would receive in a racially integrated school system... We conclude that, in the field of public education, the doctrine of "separate but equal" has no place. Separate educational facilities are inherently unequal.

Based on this excerpt, the Supreme Court found all of the following faults with segregation in schools EXCEPT:

Question 9 Explanation:
Educational resources are not mentioned in the excerpt. Line 2 mentions that the segregation denotes inferiority. Line 3 mentions the reduced motivation to learn. Lines 3 and 4 mention the slowed mental development resulting from segregation.

This excerpt is from a speech given by Susan B. Anthony in 1873.

Friends and fellow citizens: I stand before you tonight under indictment for the alleged crime of having voted at the last presidential election, without having a lawful right to vote. It shall be my work this evening to prove to you that in thus voting, I not only committed no crime, but, instead, simply exercised my citizen's rights, guaranteed to me and all United States citizens by the National Constitution, beyond the power of any state to deny. The preamble of the Federal Constitution says: "We, the people of the United States, in order to form a more perfect union, establish justice, insure domestic tranquility, provide for the common defense, promote the general welfare, and secure the blessings of liberty to ourselves and our posterity, do ordain and establish this Constitution for the United States of America." It was we, the people; not we, the white male citizens; nor yet we, the male citizens; but we, the whole people, who formed the Union. And we formed it, not to give the blessings of liberty, but to secure them; not to the half of ourselves and the half of our posterity, but to the whole people—women as well as men. And it is a downright mockery to talk to women of their enjoyment of the blessings of liberty while they are denied the use of the only means of securing them provided by this democratic-republican government—the ballot.

Based on this excerpt, what you can you infer about Susan B. Anthony?

Question 10 Explanation:
Anthony states that she is "under indictment for the alleged crime of having voted at the last presidential election." This makes it clear that she was arrested for voting. In the last paragraph she references "women as well as men" and mentions "the ballot." This suggests that she was arrested for voting because of her gender. Some of the other answer choices could be true, but they cannot be inferred from this speech.
Once you are finished, click the button below. Any items you have not completed will be marked incorrect. Get Results
There are 10 questions to complete.
Return
Shaded items are complete.
Return
You have completed
questions
question
Your score is
Correct
Wrong
Partial-Credit
You have not finished your quiz. If you leave this page, your progress will be lost.
Correct Answer
You Selected
Not Attempted
Final Score on Quiz
Attempted Questions Correct
Attempted Questions Wrong
Questions Not Attempted
Total Questions on Quiz
Question Details
Results
Date
Score
Hint
Time allowed
minutes
seconds
Time used
Answer Choice(s) Selected
Question Text
All done
Need More Practice!
Keep Trying!
Not Bad!
Good Work!
Perfect!