Your answers are highlighted below.
Genetically modified crops and livestock offer the possibility of greater yield and food quality, reductions in pesticide use, and higher profits for agricultural businesses. They are viewed by some as a way to help reduce world hunger by increasing food production and reducing losses to pests and varying environmental conditions. Each year, industrial agriculture relies more heavily on genetically modified crops. There are some concerns about our increasing use of genetically modified crops and livestock, including their safety for human consumption and their effects on the environment.

Based on the passage above, if genetically modified crops were to be banned, what could be the largest negative impact to humans?

Question 1 Explanation:
The passage indicates that genetically modified crops offer the possibility of greater crop yield. If genetically modified crops were to be banned, the conclusion is that there would be less food available.
Battery companies make impressive claims about how long their batteries will last. A student decided to test the running time of different batteries to determine which battery lasts the longest. The student tested 6 different batteries, 4 brand name and 2 generic, using flashlights. The results show that the battery referred to as Name Brand A lasted the longest, with 101 hours of runtime:

It could be argued that this experiment was not set up using proper experimental protocol. What would need to change in the experiment for the results to be valid?

Question 2 Explanation:
In an experiment, only one variable can be tested. Therefore, the type of flashlight should remain the same for each battery that is being tested, since the point of the experiment was to test the claims made by battery companies. The square above is based on the eye color of two parents. One of the parents has brown eyes and carries the recessive gene for green eyes (a). What is the probability that a biological child of these parents will have brown eyes?

Below is the chemical equation for photosynthesis:

Which of the following statements about photosynthesis is correct?

If you were reading a scientific report, and it referred to a wavelength of 455 nm, which color would it be referring to?

Question 5 Explanation:
You can approximate the wavelength of blue by looking at the diagram and estimating that it has a wavelength just above 450, midway between 400 and 500 nm. 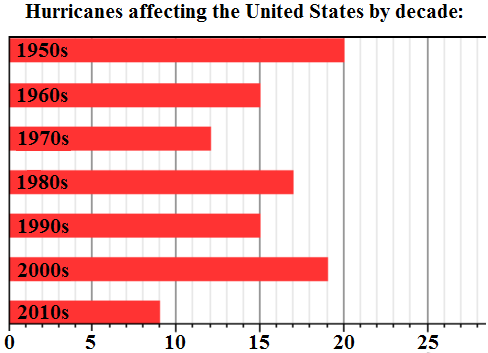 What is the median of number of hurricanes per decade?

Question 6 Explanation:
The "median" is the "middle" value in the list of numbers. To find the median, your numbers need to be listed in numerical order from smallest to largest. First list out the number of hurricanes that occurred in each decade:
20, 15, 12, 17, 15, 19, 9

What is the mode of this data set?

Question 7 Explanation:
The "mode" is the value that occurs most often. The number 15 occurs twice in this data set. All other numbers occur only once, so the mode is 15.

What is the range of this data set? Which of the following organisms fill more than one role in this ecosystem?

If additional cheetahs were introduced into this ecosystem, shortly thereafter we would expect a decrease in the:

Question 10 Explanation:
Arrows are pointing from hares and gazelles to cheetahs. This indicates that cheetahs eat hares and gazelles. Adding more cheetahs would quickly cause a decrease these populations. Predicting the long-term effects would be more challenging.

After adding the water, how many liters of liquid are in the beaker?

To convert milliliters to liters, divide by 1000:

1200 ÷ 1000 = 1.2 L
Once you are finished, click the button below. Any items you have not completed will be marked incorrect. Get Results
There are 11 questions to complete.
Return
Shaded items are complete.
Return
You have completed
questions
question
Your score is
Correct
Wrong
Partial-Credit
You have not finished your quiz. If you leave this page, your progress will be lost.
Correct Answer
You Selected
Not Attempted
Final Score on Quiz
Attempted Questions Correct
Attempted Questions Wrong
Questions Not Attempted
Total Questions on Quiz
Question Details
Results
Date
Score
Hint
Time allowed
minutes
seconds
Time used
Answer Choice(s) Selected
Question Text
All done
Need More Practice!
Keep Trying!
Not Bad!
Good Work!
Perfect!